Are you ready for this? The cuteness that is my gorgeous girl Mia in her new Christmas jumper (even if I do say so myself) ? Christmas jumper are *everywhere* this year so it’s only right that Mia has one of her very own. I intend on knitting one for Ollie too but he hates wearing clothes, absolutely hates it. Mia is such a little girl though, she loves dressing up.

The pattern is from Debbie Bliss Fall/Winter 2013 magazine. The instant I saw the pattern I knew I was destined to make at least one of them. The yarn is Garnstudio DROPS Nepal that I bought at the Knitting and Stitching show from Winnie’s Wool Wagon. It was on sale and cost less than €2 per ball from memory. In the end I bought enough for about 4 coats I’d say, I ended up needing far less yarn that the pattern suggested, less than one ball of each colour for Mia’s coat (she’s a Yorkie/Chihuahua cross, so pretty small). 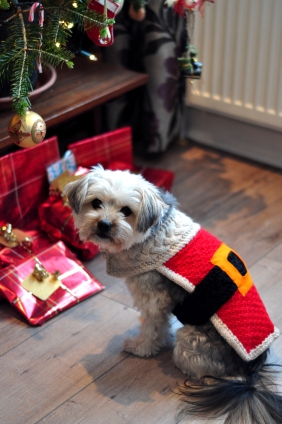 This pattern is great as it’s very easy to tailor to your own dog, I just had to keep measuring it against Mia as I was knitting. The cables felt like they were taking FOREVER, but in the end they add great stability around the neck, and also on the belt. You can barley see the cabling on the belt because it’s black but it’s a lot more structured than garter stitch would be. I love it, and Mia loves it. She gets so much attention when she’s wearing it and she loves that too.

*taps screen* Is there anyone out there? Hello? I know I haven’t been here for a while but I hope there are still a few people reading.

The last few week seem to have flown by and all of a sudden it’s nearly Christmas. As I’m currently working as a Library Intern and disposable income is somewhat scarce, I decided to put my thinking cap on and come up with a gift idea that would be economical, quick and easy but with a bit of a wow-factor.

My LYS started stocking Embellish Knit which allows me to knit icord really quickly and an idea was born. I had already played with icord necklaces but I wanted to try something a bit more complex. I can’t claim this design as my own because I’m using tutorials written by someone else, but I would like to think I put my own spin on them.

For the necklace I used a little under three metres of icord and this tutorial for a knotted necklace from Operation DIY. For the bracelet I used about a metre of icord and this tutorial for a knotted cord bracelet from Katrinshine, except that I used one continuous piece of cord rather than two separate pieces. Both necklace and bracelet are secured at the back using a crimp clasp with a lobster clasp. The teeth on the crimp clasps grip the yarn well and feel very secure. I then put a few stitches in the knots to hold them in place and buried the ends on the icord.

I also had some Zettle Panda yarn from Lidl, which works well too. This yarn also had a lovely sheen to it, I have some deep pink and a lovely cornflower blue, but I think I’ll be picking some more up the next time my local Lidl have it in stock. Right, now I’m off to what feels like miles of icord to get all my Christmas presents made.

Are you doing any Christmas knitting? If so what have you chosen and why?

Happily indulging the creative me through knitting & photography. I'm passionate about animal welfare & am a librarian by day, crafter by night.

10 Gifts for Knitter (curated by a knitter)

10 Gifts for Librarians (curated by a librarian)

A tourist’s guide to yarn shops in Dublin